Under this heading we have classified behaviours related with taking material through the mouth and into the digestive system.

Horses are an herbivorous, grazing species that graze an average of 14-15 hours a day in the wild. Ronald Keiper (1985) found that horses on Assateague island spent 78% of daylight hours grazing. Horses are non-ruminants; they have a single stomach and the digestion of ingested roughage occurs in the cecum at the end of the large intestine. Cecal digestion, high level of food intake, and quick passage of food through the digestive system allows horses to have a diet high in fiber and low in protein.

Although horses prefer grasses (McDonnell, 2003), they are known to forage and derive nutrition from bark, tree, shrub buds, small woody stems, aquatic plants, fruits, roots and seeds (Hubbard and Hansen 1976; Varva and Sneva 1978; Salter 1978; Salter and Hudson 1979; Hanley and Hanley 1982; Krysl et al. 1984a). Feral and free ranging horses also pick food from the floor, and have been noted to glean and lick as well. 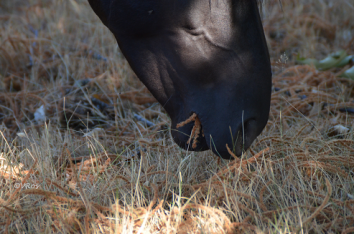 mare and foals at Trampales

On Assateague Island along the Maryland-Virginia coast Keiper  (1985), found that these horses graze during 54.6% of the night time hours. Tyler (1972) in her 3 year study of the New Forest ponies stated; ‘from the few observations that were made at night, it seemed that most of the hours of darkness in all seasons were spent feeding’. From these studies it seems that on the onset of darkness walking and drinking activity becomes greater, especially in the first hours of darkness (Keiper, 1985).

Drinking in feral horses is not as frequent as one would expect, many only drink once or twice a day and some have been noted to travel considerable distances to drink once every 2 days. Drinking activity is variable in time and frequency and occurs both during day and night. (Pellegrini, 1971; Feist & McCullough, 1976) A direct correlation was observed between drinking frequency and ambient temperatures, with a clear increase in frequency occurring at temperatures above 30 C. (Crowell-Davis, 1985)