This entry was contributed  by Evelina Isola of WILD HORSEWATCHING – I Cavalli Selvaggi dell’Aveto. 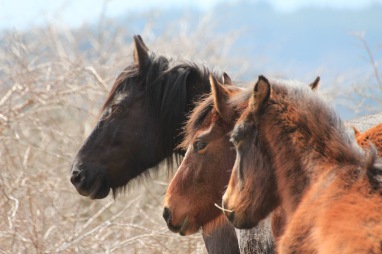 They are the heritage of horses working in the valley at about 20 years ago. Since the last owner died their number grew up and the new generations never had relationship with humans. They feed, reproduce, find water and whatever they need in complete autonomy.  Their biology and their behaviour seems to be the same of wild american and mongolian horses.
They represent a great treasure for the territory because of their relationship with environment and habitat conservation
In the territory lives a population of wolfs, able to control by natural predation the increasing number of heads.

Census and further details presently under study in collaboration with the University of Genova.

Issues worth noting and needed actions

Six years ago, humans’ intolerance caused the kill – by shot – of two horses. For some people in the valleys, horses represent a danger for their fields and breeding, because during the winter, sometimes, horses move down from the hills top to the villages looking for warmer weather and easier feeding sources. For this, in 2010 was written an agreement between local municipalities, Aveto Regional Natural Park, breeders associations, health institutions and animals’ protection associations, in order to manage herds. For this agreement horses should be captured and transfer in another locations or donate to private people. But, many animals died during capture operations, others were kept by infarct when they were putted in the boxes. Some females died during labor.

Now we are carrying out a conservation program in order to find the correct juridical classification for them. For Italian laws, in fact, horses are only classified as “farm” or “sport” animals. We are raising public awareness of their unique value, on biological and ecological point of view, and of their value as an economic resource for local-slow-rural tourism.