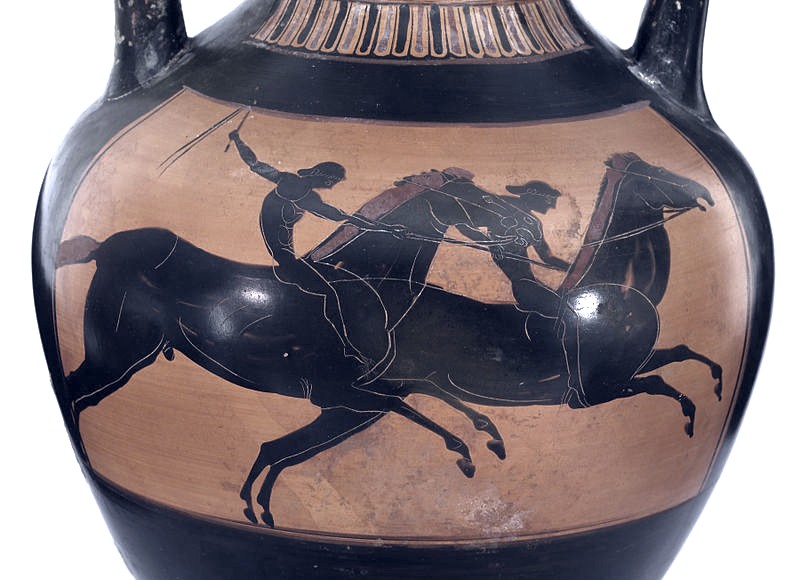 Xenophon, the Greek soldier, historian, essayist, philosopher, and horseman, (431-354 B. C.) was born to a well to do Athenian family and was a student of one of the fathers of Greek Philosophy: Socrates. He was the first to take notes on the conversation of Socrates, sharing these with others under the title of ‘Memorabilia.’

He took part in the campaign of the Persian prince Cyrus the Younger against his brother, king Artaxerxes II Mnemon, which failed in the battle of Cunaxa. Xenophon led the famous retreat of the Ten Thousand, becoming a mercenary leader with a band of notoriously ill-disciplined Greek mercenaries who were trapped in Mesopotamia.

On his return to Greece, he worked as a mercenary and was rewarded with a country estate where he enjoyed the life of the landed gentry. Xenophon lost his estate in a war and settled in Corinth for the remainder of his life. His most famous work is Anabasis, the story of the Ten Thousand. However, we have taken excerpts from only two of his many works; The ‘Cavalry General’ and ‘On Horsemanship’.

Over 2000 years have passed, and his words still hold true, although generally ignored in equestrian circles.

“Just as a house would be of little use, however beautiful its upper stories, if the underlying foundations were not what they ought to be, so there is little use to be extracted from a horse, and in particular a war-horse, if unsound in his feet, however excellent his other points; since he could not turn a single one of them to good account.”

“At the same time pains should be taken on the owner’s part to see that the colt is gentle, tractable, and affectionate when delivered to the professional trainer. That is a condition of things which for the most part may be brought about at home and by the groom — if he knows how to let the animal connect hunger and thirst and the annoyance of flies with solitude, whilst associating food and drink and escape from sources of irritation with the presence of man. As the result of this treatment, necessarily the young horse will acquire — not fondness merely, but an absolute craving for human beings. A good deal can be done by touching, stroking, patting those parts of the body which the creature likes to have so handled. These are the hairiest parts, or where, if there is anything annoying him, the horse can least of all apply relief himself.”

“The groom should have standing orders to take his charge through crowds, and to make him familiar with all sorts of sights and noises; and if the colt shows sign of apprehension at them, he must teach him — not by cruel, but by gentle handling — that they are not really formidable.”

“But if food and exercise with a view to strengthening the horse’s body are matters of prime consideration, no less important is it to pay attention to the feet. A stable with a damp and smooth floor will spoil the best hoof which nature can give.”

“The one best precept — the golden rule — in dealing with a horse is never to approach him angrily. Anger is so devoid of forethought that it will often drive a man to do things which in a calmer mood he will regret.Thus, when a horse is shy of any object and refuses to approach it, you must teach him that there is nothing to be alarmed at, particularly if he be a plucky animal; or, failing that, touch the formidable object yourself, and then gently lead the horse up to it. The opposite plan of forcing the frightened creature by blows only intensifies its fear, the horse mentally associating the pain he suffers at such a moment with the object of suspicion, which he naturally regards as its cause.”

“But possibly you are not content with a horse serviceable for war. You want to find him a showy, attractive animal, with a certain grandeur of bearing. If so, you must abstain from pulling at his mouth with the bit, or applying the spur and whip — methods commonly adopted by people with a view to a fine effect, though, as a matter of fact, they thereby achieve the very opposite of what they are aiming at. That is to say, by dragging the mouth up they render the horse blind instead of alive to what is in front of him; and what with spurring and whipping they distract the creature to the point of absolute bewilderment and danger.”

“For ourselves, however, far the best method of instruction, as we keep repeating, is to let the horse feel that whatever he does in obedience to the rider’s wishes will be followed by some rest and relaxation.”

“To quote a dictum of Simon, what a horse does under compulsion he does blindly, and his performance is no more beautiful than would be that of a ballet-dancer taught by whip and goad. The performances of horse or man so treated would seem to be displays of clumsy gestures rather than of grace and beauty. What we need is that the horse should of his own accord exhibit his finest airs and paces at set signals.”

“The majesty of men themselves is best discovered in the graceful handling of such animals.”

The above excerpts are taken from The University of Adelaide Library.

‘On the Cavalry General’

‘On the Cavalry General’ is a discourse on the merits a cavalry general should have, and how to develop a cavalry force, and some tactical details to be applied in the field and in a festival exhibition. Again, we have chosen a couple of snippets from the text, in which Xenophon’s priorities are clearly defined:

Having made sure that the horses are in good condition

the next business is to train the men.

“While the ranks are filling up, you must see that the horses get enough food to stand hard work since horses unfit for their work can neither overtake nor escape. You must see that they are docile because disobedient animals assist the enemy more than their own side. And horses that kick when mounted must be got rid of, for such brutes often do more mischief than the enemy. You must also look after their feet so that they can be ridden on rough ground, for you know that wherever galloping is painful to them, they are useless.”

“For getting horses’ feet into the best condition, if anyone has an easier and cheaper method than mine, by all means, adopt it. If not, I hold—and I speak from experience—that the right way is to throw down some stones from the road, averaging about a pound in weight, and to curry the horse on these and to make him stand on them whenever he goes out of the stable. For the horse will constantly use his feet on the stones when he is cleaned and when he is worried by flies. Try it, and you will find your horses’ feet round, and will believe in the rest of my rules.”

What animals can teach us about stress

How the zebra got its stripes: to ward off flies

The riddle behind zebra stripes

Hippo gets zebra foal across the river

Why animals’ pupils come in different shapes and sizes

Ancestral horses through the eyes of Charles R. Knight

Whips hurt horses – if my leg’s anything to go by

A snippet on habituation

On eagles and horses

Altanero and the fly catcher

Group specific behavior as a basis for equine culture

Horse behaviour: generalizations from observations of one population?

Snapping at “Alphas” and submission in horses

A review of horsemanship in early literature:Hints on Horsemanship, to a Nephew and Niece

A review of horsemanship in early literature: “The Arabian Art of Taming and Training Wild and Vicious Horses”

Tarpan: one “Heck” of a story

An Understanding of Horse