A huddle is characterized by individuals crowding or gathering together. Most often, huddles are linked to thermoregulatory processes, and this social thermoregulation, or “(…) the ability of some species to use sociality or grouping to regulate their body temperature” (Gilbert, 2010), is a common energy saving strategy for many endothermic species (Canals, 1998; Alberts, 1978).

In terms of horses huddling as a means of social thermoregulation, there really is very little work done. During cold weather horses have been observed to huddle or crowd together, on windy or rainy days; horses typically stand close to one another with “backs to weather” or “backs to natural windbreak”, as described by McDonnell (2003):

Backs to weather – Typically observed during windy or rainy days, Two or more horses stand closely together with their “(…) hindquarters into the wind.” (from the Equid Ethogram p. 79)

Backs to natural windbreak – Two or more horses stand closely together with their “(…) hindquarters protected from the wind by vegetation or other feature of the environment.” (from the Equid Ethogram p. 78)

In horses, the social bonds between unrelated mares, friendships, contribute to reproductive success as suggested by Cameron et al (2009) in a study on the Kaimanawa feral horses of New Zealand.

Horses have preferred partners within their band or herd with whom they associate more often with than other members of the group. Claudia Feh (1987), found that in the Camargue horses, horses had up to two, rarely three, preferred partners. These affiliative interactions are characterized by individuals sharing “personal space” (Dierendonck & Goodwin, 1992), and synchronizing activities.

Whether horses are grouped tightly or loosely may seem trivial, but for the sake of alienating the functional characteristics of different huddles, and their forms, the distances between individuals is likely of prime importance.

A Pottoka band huddled under the shade of an oaktree forest in the Sierra of Extremadura. This is an example of a tight huddle, wherein members of the group are in physical contact with one another. In this case we see a band stallion facing us while having flies conveniently swatted off his face by his 4 month old daughter. 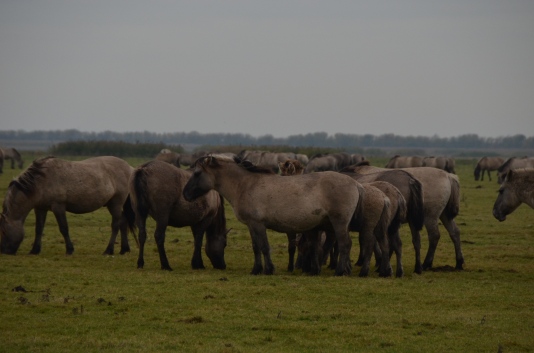 In the warmer months, which tend to correlate with an increase in insect harassment, two or more horses stand close together, typically tail to shoulder to the nearest neighbour. This is usually referred to as anti-parallel standing. In this position, individuals take advantage of one’s proximity to another to keep pesky biting insects at bay. Typically, horses have flies swished from their faces by the tail of a neighbour, but this can also be achieved by rubbing or bumping those close by.